HARRY POTTER DEFINES OUR GENERATION. Our parents had such cultural obsessions as Star Wars or (if they are like my mom) The Beatles. However, it was a kid on a broomstick who captured the hearts and imaginations of many of us. Deathly Hallows alone saw 11 million copies fly off the shelves in the first 24 hours it was on sale. The phenomenon created a frenzy among the masses, and I was no exception. With a total gross of $938 million* for the fifth movie, I’m positive that I’m not alone in saying that I was really excited for the newest film version of J.K. Rowling’s saga about the wonder-child of the wizarding world. I’m now even luckier, because I have yet another opportunity to see Harry Potter and the Half Blood Prince on the big screen (as it should be seen) at Grafton Stovall on campus. 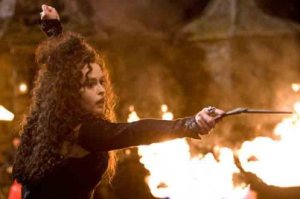 I practically immersed myself in the book series during my childhood (brace yourselves everybody, because you’re currently reading the blog of a celebrity. I ranked number #1 on the Scholastic Trivia Site …… for a whole day). So naturally when I found out that it was coming to theaters I was ecstatic. However, much to my dismay, the series has been plagued by inconsistencies with the feel of the movies. This is due to there being 4 different directors for the 6 films.

Sorcerer’s Stone and Chamber of Secrets were both directed by Chris Columbus. Now I feel bad being too harsh on the man, since he was involved with bringing us 1985’s The Goonies, but he is really lacking in creativity.   The first two movies were page-by-page cookie cutter versions of the books. The fans wanted more excitement than what Columbus had to offer.

Thus came Alfonso Cuaron (who also directed 2006’s Children of Men) to tackle the third installment. He is by far my personal favorite because he brings an unparalleled cinematography to the project. Unfortunately, it appears that I’m not in the majority on this one, because out of the six movies Prisoner of Azkaban fared the worst at the box office. It took in a MERE $795 million globally.

Seeing the drop in revenue, the producers decided to once again try to shake things up in the world of Harry Potter filmmaking. Mike Newell (who had just come off of directing Mona Lisa’s Smile) took the helm of Goblet of Fire. This was a good movie, but it would’ve been hard to mess up with such a great book as its source. However, there is something in the fourth Harry Potter that has never stopped bothering me. While the Triwizard Tournament would have been an incredible and enthralling experience for those participating, the ones spectating from the sidelines really got shorted on this one. Hogwarts students were told that they didn’t have quidditch to watch all year…… so they could watch the top of a lake or the outside of a giant bush. If you still aren’t on my side on this issue, just imagine yourself going down to Bridgeforth Stadium. Now instead of watching Mickey Matthew’s team at work, you have the pleasure of witnessing the latest in the exciting world of shrubberies. With me now?

FINALLY, THOSE BEHIND THE HARRY POTTER FRANCHISE FOUND THEIR ROCK IN DAVID YATES. After the massive success of Order of the Phoenix (grossing $938 million globally, second only to Sorcerer’s Stone at the time), Yates was signed to direct all of the remaining films. This has greatly appeased my problems with the series’ lack of a consistent style and I’ve gotten a lot more enjoyment out of the films. Being that this is a quality film and a landmark in your generation, you owe it to yourself to go see Yate’s newest Harry Potter and the Half-Blood Prince playing this week for the same low $2.50.

Like my views on the movies or think I couldn’t be more wrong? I’d love to hear from you. Think you can beat me in some HP trivia? Bring it on.